YOU HAVE TO SEE IT BEFORE YOU CAN DO IT!

Research of the best players in the world proves they do not all have perfect golf swings, yet they all possess a few key elements that are simple for golfers of any age or ability level to implement into their game. These key elements make a huge difference in performance on the golf course and lower scores!

VISUALIZATION is one of the key elements you can implement into your game that has nothing to do with the golf swing, but will lower scores dramatically. Learn a few simple exercises that can help you identify the best way to create positive images in your mind before each shot.

THE BASICS Use these rules when working on your visualization +

Does visualization really work? Jack Nicklaus once said that he Never hit a shot , even in practice , without having a sharp picture of it in his head. “It’s like a color movie,” he explained. “First, I ‘see’ the ball where I want it to finish, nice and high and sitting up high on the bright green grass. Then the scene quickly changes and I ‘ see’ the ball going there: its path , trajectory and shape , even its behavior on landing.”

Visualization , or mental rehearsal, is one of the most common psychological
techniques used by sports professionals. The idea is that you can create a mental image of something you want to accomplish—like a golf shot —replay that image repeatedly and then perform the action in a manner consistent with the image.

There are essentially two types of visualization

How does simply thinking about a future performance actually influence performance on the day of the event? Brain research using electroencephalogram ( EEG , which measures electrical impulses in the brain) and electromyography (EMG , which measures electrical impulses in muscles) equipment sheds some light on this process. Psychologist Richard Suinn tested a group of downhill skiers using EMG equipment and found that the brain sent the same electrical impulses or instructions to the muscles whether the skiers were simply thinking of a particular movement or actually carrying it out.

Some scientists believe mental rehearsal works much like “priming the pump ” by creating neural pathways necessary for actual performance. The brain and body work together on creating an outcome, increasing the likelihood of producing that result when you are actually performing. However, many golfers I work with tell me they cannot visualize their shots, especially with the clarity of Jack Nicklaus’ visualizations . There are numerous reasons golfers might struggle, including not understanding how the brain and body communicate, having unrealistic expectations about the time it takes to develop and maintain neural connections, having skepticism about its effectiveness, and not willing to take the time to practice this skill. It’s also worth stating that some people just don’t have the natural ability to visualize as a way of processing information and will do better using their sense of feel or hearing in the image.

MUSCLE RELAXATION TEST Identify tension and use simple tools to relax under pressure. +

MUSCLE RELAXATION EXERCISE simple tool to help you identify what areas of your body get tension. Once you identify your tension, you can use simple techniques to release that tension on the golf course.

BREATH2RELAX Download mobile app and do this exercise if you have 10 minutes of free time in your day! +

Visualize
See it Before You Do It 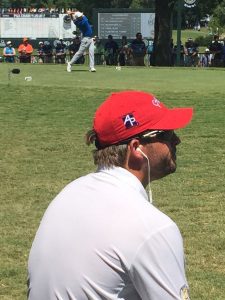 Pre Round at PGA Championship

Fans asked what music I was listening to as I sat there with my ear phones in, preparing to hit my first tee shot in a major championship. There was no music, I was just copying Jason Day's exercise so I could perform at my best when the stakes were at the highest! You can too, do the next exercise so you can try a simple exercise that will change your game. 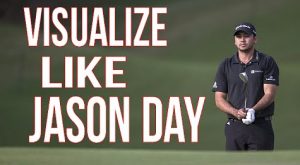 Yes, I worked with Jason Day's Performance coach for 4 years and he still mentors me to this day.

Its not rocket science, click this link to access a typical performance exercise to improve your visualization and relaxation skills.

My goal is to educate golfers of all ability levels on how to practice golf smarter, in order to improve faster. Golf was labeled “the worst practiced sport in the world” recently by Golf Science Lab. I could not agree more, golf is hard but we make it harder by the way we train. Join me and my team of coaches as we continue to find the best ways to practice and play golf so all of us can enjoy the game more and shoot lower scores! 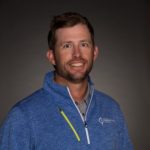